More than 85 percent of all wood-based materials are manufactured using adhesives containing formaldehyde. Increasingly strict regulations concerning these emissions have been creating major challenges for adhesive manufacturers and the wood-based product industry since the 1970s. The primary objective of the project was to considerably reduce the formaldehyde emissions from wood-based products by adding small amounts of absorbers on the basis of zeolites with simultaneous catalytic effect.

Adhesives containing formaldehyde are, compared to other suitable types of adhesive, extremely economically-priced and are therefore indispensible for the wood-based materials industry in terms of the economical aspect. The reaction requires a surplus of formaldehyde which, in the form of gas, causes undesired emissions both during the production process and from the finished boards

The first step took place at the ISC, where assorted zeolites were compiled and partially synthesised, from which an absorption and/or degradation effect in connection with formaldehyde could be expected. Included in this selection were natural, synthetic and modified zeolites. To this end, a zeolite Y was modified with (3-aminopropyl)-triethoxysilane with the aim of binding the formaldehyde through the formation of a so-called Schiff base (Fig. 1 and 2). Theses zeolites were examined at the WKI, where their ability to bind formaldehyde from the air was compared. A relevant effect was observed for all the zeolites, whereby the synthetic forms – and, in particular, their modifications – proved to be especially effective (Fig. 3). In an initial test, these zeolites were introduced into particle boards, whereby the proportion of zeolites was 5% respectively. The zeolites were thereby interspersed either evenly or in layers. For the fresh samples, a reduction in formaldehyde emission of up to 30% was determined.

In further tests, the effect should be further optimised through variation of both the zeolites and the board production methods. At the end of the current pilot project, practical implementation through project partners from the industry will be pursued. The developed wood-based materials have been registered for a patent under the title “Lignocellulosehaltige Werkstoffe mit geringer Formaldehydabgabe” (Lignocellulose-containing materials with low formaldehyde emission).
The project was conducted by the Fraunhofer ISC (production of the zeolites), the WKI, specialist department Technology for Wood-Based Materials (production of the boards) and the WKI, specialist department Material Analysis and Indoor Chemistry (determination and assessment of the effects). 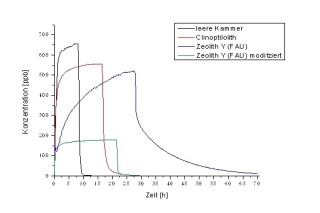