In India, approximately 70 per cent of the population uses water not from taps but primarily that from under the ground. Leaching into it are harmful substances such as agrochemical residues, the arsenic of Himalayan ore veins, and hexavalent chromium produced from leather tanneries. This contamination has come to be seen as a societal problem, having caused health problems for as many as 50 million people.
To solve such drinking-water issues worldwide, Panasonic has developed its own photocatalytic water purification technology. This technology uses photocatalysts and the UV rays from sunlight to detoxify polluted water* at high speeds, creating safe and drinkable water. This breakthrough caught much attention when Panasonic unveiled it in Tokyo at Eco-Products 2014.
With two core technological developments, Panasonic’s Photocatalytic Water Purification Technology processes water more efficiently
1. Achieving a High Capacity to Decompose Toxic Substances with Synthesis Technology of Photocatalysts When photocatalysts are exposed to ultraviolet light, formed reactive oxygen purifies the toxic substances. However, TiO2, a kind of photocatalyst, comes in extremely fine particles and is troublesome to collect once dispersed in water. Methods of binding TiO2 to larger matter have hence been used, but they in turn suffered a loss of surface active site. Panasonic developed a way of binding TiO2 to another particle, zeolite, which enables photocatalysts to maintain their inherent surface active site. Moreover, since the two particles are bound together by electrostatic force, there is no need for binder chemicals.
2. Achieving High Processing Speeds with Water Purification Technology that Disperses Photocatalytic Materials When these novel photocatalytic particles are agitated, TiO2 is released from the zeolite and dispersed throughout the water. As a result, reaction speed is markedly elevated compared to conventional methods of fixing TiO2 on a surface of substrates, enabling a large volume of water to be processed in a short amount of time. Leaving the water still will cause TiO2 to bind to zeolite again, making it easy to separate and recover the photocatalysts from the water – allowing them to be reused at a later time.
Establishing an infrastructure for supplying safe drinking water

Along with being driven by light, another key feature of photocatalysts is that they remove any necessity of pharmaceuticals. As such, they offer a low-cost and environmentally friendly way of treating water.
Panasonic aims to provide this water to small rural communities, for example, using trucks equipped with photocatalytic water purification systems. Beyond this, the company is looking at linking up with local water supply operators to establish water purification facilities, and is also considering the licensing of this technology to businesses. Panasonic is working to lower costs and maintenance requirements with the water purification systems – its aim being to make this technology available right across India and other emerging nations.
http://news.panasonic.net 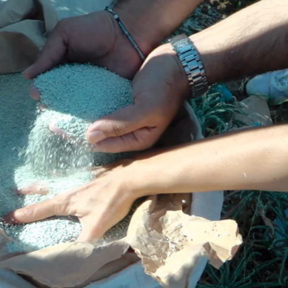